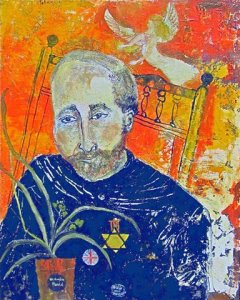 Beryl Bainbridge, 21 November 1932 to 2 July 2010, was an English writer from Liverpool. She was primarily known for her works of psychological fiction, often set among the English working classes. She was also an untrained artist using painting sales to survive as a single mother while writing novels. Using her kitchen table in Camden, her finger and often spit, she showed scenes of everyday life and political and historical fantasy. Her home was filled with unusual objects, including a stuffed buffalo.

Beryl Bainbridge might now be known as a fashionable “outsider” artist, like those shown by the Museum of Everything and currently at the Hayward Gallery. She used whatever was to hand to make work and survive. She sold large and vivid canvasses to supplement her wages, at one point as an actress with in 1961 a bit part in Coronation Street where she helped one of the characters make a Ban the Bomb placard. She was writing from an early age, by 10 keeping a diary and at 11 appearing on Northern Children’s Hour radio show, and was expelled from her Girls’ School being caught with a dirty rhyme, written by someone else. 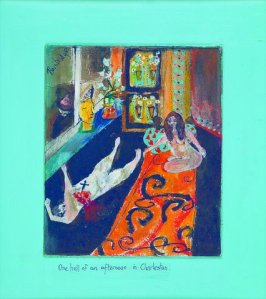 Bainbridge began to write, primarily basing her work on incidents from her childhood. Her first novel, Harriet Said…, was rejected by several publishers, one of whom found the central characters “repulsive almost beyond belief”. It was eventually published in 1972, four years after her third novel, Another Part of the Wood.  Bainbridge won the Whitbread Awards prize for best novel in 1977, Injury Time, and again in 1996; Every Man for Himself.  She was nominated five times for the Booker Prize, described in 2007 as “a national treasure” and, in 2008, The Times newspaper named Bainbridge among their list of “The 50 greatest British writers since 1945”. 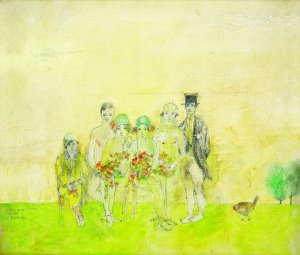 Beryl Bainbridge’s best friend, Psiche Hughes, was involved with Beryl’s family and estate, in the Liverpool Museum exhibition of Beryl’s paintings, for which she contributed objects and stories from her long history with Beryl. Their friendship and Beryl’s life including her writing and painting is documented in Psiche’s book published by Thames and Hudson.  In 2003 Beryl told The Guardian: “In 1965 having left my home town of Liverpool, and living in a top-floor Hampstead flat, I gave birth to a daughter, expelled in a thunder storm but with nothing suitable in which to wash her, until Philip and Psiche Hughes in the ground floor flat came up trumps and loaned their chicken casserole dish.” Beryl and Psiche became and continued to be best friends and later both became students at Camden’s Working Men’s College. 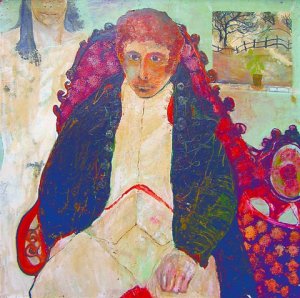 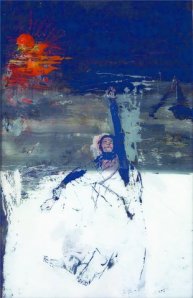 Psiche Hughes, a former lecturer in Latin American and comparative literature at the University of London, has published several translations of prose and poetry.  Psiche currently studies ceramics at Working Men’s College.